Beyond our ideas of right-doing and wrong-doing,
there is a field. I’ll meet you there.
Rumi (Translated by Coleman Barks)

All around the world, people are planning local projects to celebrate a World Day of Listening on October 21st.  This worldwide event began with one Focuser’s suggestion and has been enthusiastically greeted by many individuals and organizations, including Focusing Initiatives International.

So why a World Day of Listening?

We hear people – politicians, religious leaders, educators – decrying the lack of civility in public discourse and calling for listening. It has become almost a truism.

And yet everywhere, too often we see that people are not listening. News reporters, political leaders, social media, bar room discussions, wherever people are discussing world problems, dialogue too frequently degenerates into an episode of interruptions, raised voices, and name calling.

Listening, it seems, is not easy

It is therefore up to us to listen.  To listen deeply so that people can feel heard and begin to heal. 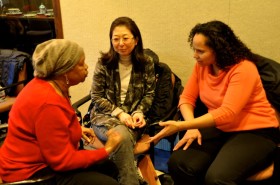 For months in 2014 the government of Liberia had exhorted their people in vain to avoid contact with the bodies of people who died from ebola.  The people did not listen because this government order contradicted all local traditions.  Deaths from the disease were skyrocketing.

Pat’s work with WHO in Liberia began with trained teams going out into the communities and asking people to tell them what was happening to them and how they were dealing with the  epidemic.  The people poured out their fear and their anger and their suspicions of the government and the hospitals.  The listening teams didn’t argue with the people, but listened fully and carefully and kept asking, “What else?  What more can you tell us?” until they said, “No more. That’s everything.”

They had spoken and been heard.  And then the team members said, “Do you have any questions you want to ask us?”

And since they had been heard, the people were ready to listen.  Questions came. And no question was too small or seen as stupid.  No solutions or orders were given, just simple facts.  This is how Ebola works.  This is the problem the hospitals are having.  This is why your families are dying.  This is the behavior that keeps you safe.  This is what kills you.

When their questions were answered, the people would discuss what they had learned.  And then they said, we understand now.   We need to let the government workers take the bodies of our loved ones for cremation so the virus can be destroyed.  This is how we can love and respect our relatives and protect our future. And this is how we can, as a community, fight the disease instead of each other.

This shift in thinking, from suspicion to cooperation, greatly helped LIberia end the epidemic.  Within a month, the tide of the epidemic turned and the number of deaths dropped to only a few dozen a week. And this happened even before most of the international aid and medical equipment had been received.

Listening made the difference.

A second listening project is still in its early days in Roseburg, Oregon, a small conservative rural town that was traumatized last year by a mass shooting at the local community college.  Even as people rallied around the victims and their families, a heated and divisive debate erupted within the community about gun violence.

Some people proposed stricter gun control.  Others feared a tyrannical government would move to take away their freedoms. Some felt that people would be safer if everyone carried a gun.  Others felt unsafe when guns were in civilian hands.  This wasn’t a new argument, but the mass shooting seemed to make it more intense, more angry, more fearful

One thing was clear amidst all the shouting.  No one was listening.  And no one felt safe.

The local League of Women Voters has decided to try to change this.  They want to create a new culture of listening in Roseburg.  To do that, they realize that they need to learn how to listen – to listen without judging, or offering advice or solutions, to listen to hear what lies beneath all the anger and shouting.  So they have developed a training and now have trained thirteen listeners who plan to go to organizations in the community and listen to people’s ideas – and fears – about community safety.

An early result is that those thirteen all want more training, so a series of trainings are being developed.  Trainings in listening and in Focusing will be available to Roseburg residents as well as to “community listeners” dedicated to this project.  While it is still too early to see what direction this project will eventually take, the League considers that as more people learn how to listen without judgement or argument, Roseburg will come closer to achieving a community culture of listening.

Both of these projects – in Liberia and in Roseburg, Oregon – are firmly based in the principles of Focusing Initiatives International.

FII welcomes the World Day of Listening and would like to encourage all of our readers to consider creating a local project, no matter how small.   You could work with an organization you belong to or do something on your own.  You could stage a public sidewalk listening event, conduct a free workshop on listening skills, or even just spend an hour privately listening to someone you know who needs to be heard.  Whatever you do will reinforce what our experience tells us is the healing power of listening in the world.